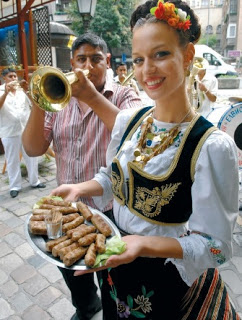 Serbian cuisine is a very rich cuisine, mainly having dishes that are extremely meaty and consistent in animal fat. Serbian cuisine is a heterogeneous one, derived from mixed traditions, mostly influenced by Mediterranean (especially Greek), Hungarian, Turkish and Austrian cousins.
The Serbian cuisine, just like Serbian culture, implies not only region elements connected to Serbia, but other parts of former Yugoslavia as well. Great influences have been marked on the whole cooking process due to peasantry, which also influenced the folk craft, music, and arts.
Under the rule of the Ottoman Empire, during the last five centuries, Serbia has had not only cultural influences but cooking ones as well. Special traditional dishes made in Serbia today have common roots with the dishes prepared in Turkey. The whole Serbian cuisine is derived from a mixture of influences coming from Mediterranean, especially Greek influences, Hungary, Turkish and Austrian cuisines.

Serbian has a great passion for food in general, having a rich cuisine and a large diversity of alcohol beverages that accompany these fat-rich dishes. Slivovitzis a strong, alcoholic beverage primarily made from distilled fermented plum juice. It tastes similar to brandy and sometimes called plum brandy in English. Specific Serbian wines have centuries of tradition behind them.

Foods include a variety of grilled meats and bread. Desserts range from Turkish-style baklava to Viennese-style tortes. The national drink of Serbia is a plum brandy. Locally produced wines are also popular and they are highly regarded. The most popular cuisines that are served in Serbia are Pasulj (Serbian Bean Soup), Soups Stews Beans, Prysnac Serbia (Broccoli Casserole), Serbian Torte, Szerb Bableves (Serbian Bean Soup).
Barbeques are very popular in Serbia, and they have developed a series of products that can only be prepared in this method. Such meals, often considered fast-food ones, include Pljeskavica (hamburger), Ćevapi (small kebabs), Vešalica, Mućkalica (mixed meat), and other various sausages.