Bamija (also known as bamia, bamya, baminja, even bavija) is a meat and okra soup/ sauce recipe. Counting as one of the area’s best okra recipes, bamija calls for okra to be cooked in water and lemon juice, then combined with meat tenderized soft by a long and deep simmer. By the way, okra is a delicacy Cleopatra swore by. 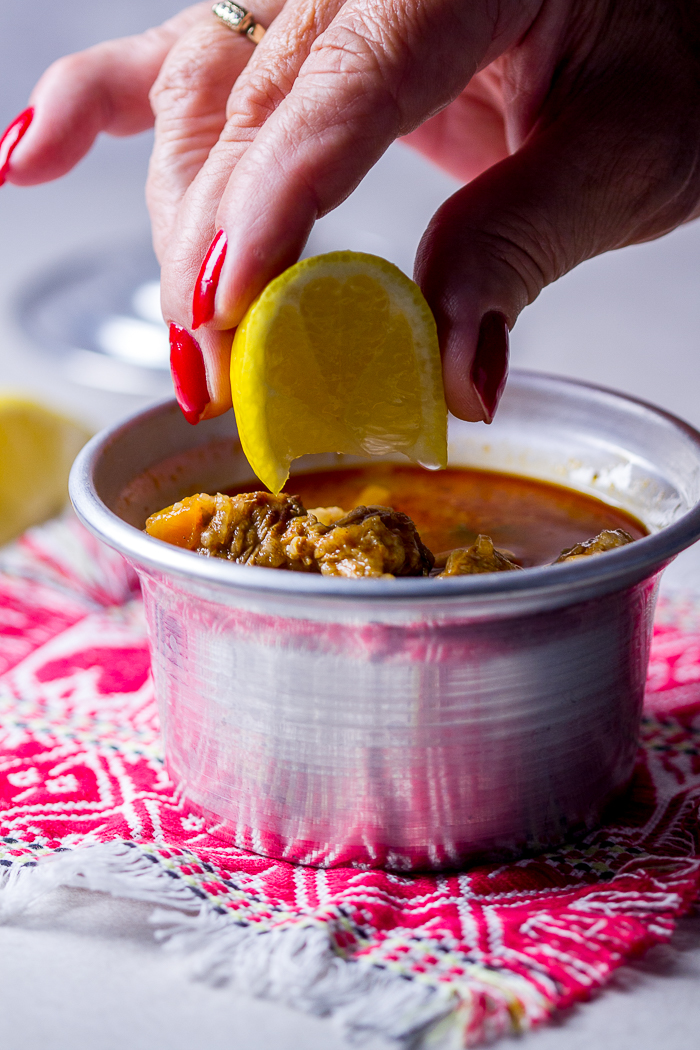 There is a food naming habit in the Balkans where many dishes are called whatever the main ingredient is called. Grah or pasulj – aka the bean – is also the name for the popular bean stew. Kupus – aka the cabbage – seconds as the cabbage stew.
Balkan okra sauce (stew or soup) of today follows the same philosophy. It’s called simply bamija.
Bamija isn’t one of the well-known regional okra recipes. Instead, it’s a delicacy usually found on Eid or Ramadan menus. Remainder of the year there seems to exist an okra amnesia.
For the life of me I don’t know why. The dish follows basic sauce principles and even has the unusual vegetable factor. By any measuring standards it should be a favorite and often repeated meal.
If you’re wondering what other okra recipes are in demand – do you remember the bey’s okra soup we made before? In fact we’ve even done another, more traditional bey’s soup later on and filmed it. Well, that particular lush chicken okra soup – accented with an array of vegetables and bound together with a thickener – is the most often occurring regional okra dish.
Unlike the overly rich gumbo – a supreme dish in its own way – today’s recipe is an easier-on-the-digestive-system intro to okra. In taste richness, it’s falls somewhere between bey’s okra soup and gumbo.

It’s flavorful. It’s filling and a standalone dish. It’s also perfect over rice or mashed potatoes.
I like it best by itself. I dip large slices of bread into it. 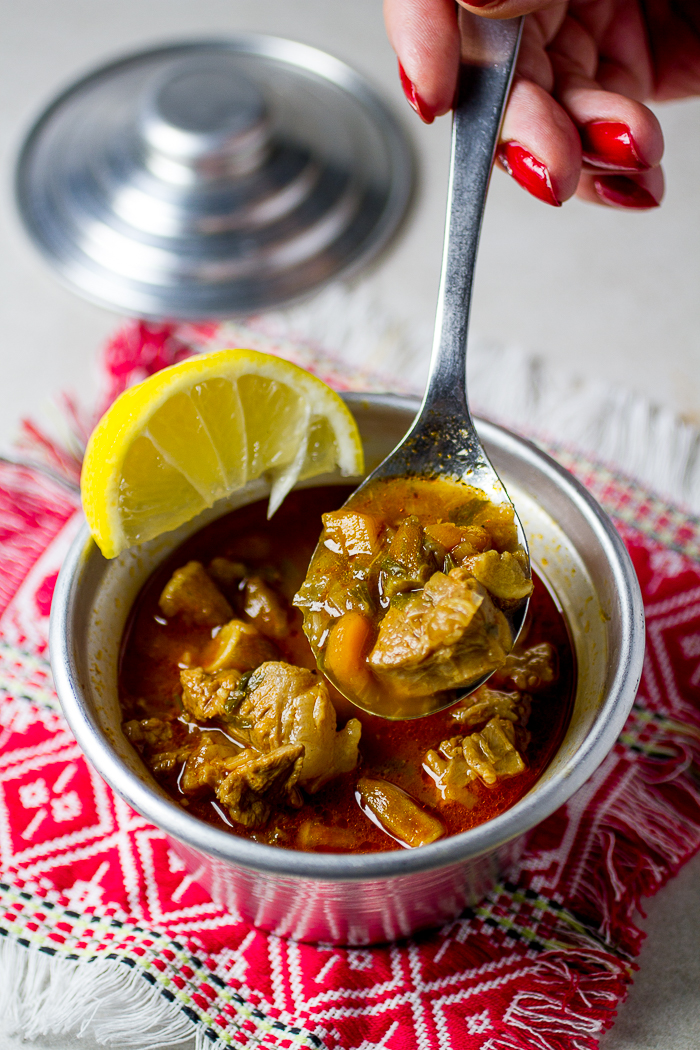 Okra is sold fresh or frozen in 2-3 inch pods. In the Balkans, especially Bosnia, you’ll find dried okra pods on a string (see photos below). One okra string is enough for a dish of 4-5 servings, and is equal to about 1/2 pound of fresh okra.

You may wonder why it’s sold on a string.

Okra has a very limited time when it can be picked so this is one way of preserving it. This dry, “stringed” type of okra is picked before it’s ripe, when it’s just under 2 inches. The younger they are, the better they are for the drying process. Once picked, they’re threaded on a piece of a very thin rope and dried. Hundreds of these strings are dried together in the shade, or even better, in a shaded drafty place.

Fresh okra is picked when ripe. Most of it is then frozen. You can find it in bags in the freezer section of most grocery stores.
I’m impartial to the dry okra. It’s the seemingly magical process of seed-like dry dots of nearly nothing becoming big and plump and incredibly flavorful that gives it a special kind of charm. 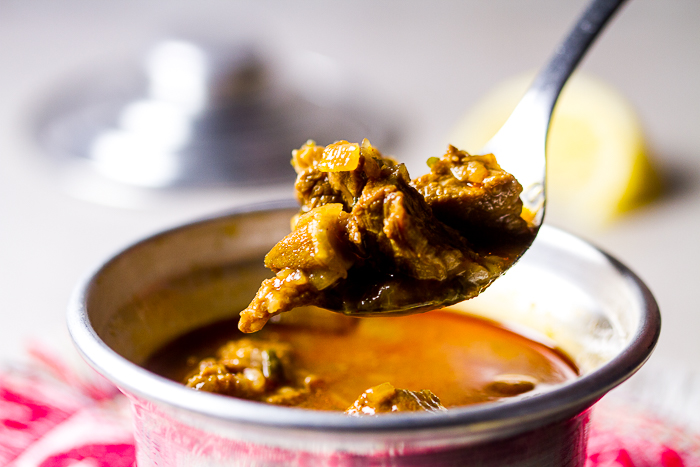 The taste vaguely pulls toward asparagus with tones of green beans. When you bite into it, there is grit and freshness underneath. In a manner of an avocado, once you bite into okra you’ll form a distinct memory of its taste and always be able to place it afterwards.

How is okra prepared?

Okra is almost never prepared by itself, and is rarely found in regional salads. It’s usually made as a sauce, or an okra soup, meaning okra is an exotic addition to a sauce made from a good cut of meat. As with most soups and stews in the area, the meat in question is usually veal with baby beef being a second favorite. (I’ve never made it with heavier meats such as lamb or goat meat. If you do, please check back, I’d love to hear how it turned out.)
Okra sauce is perfect with greasy meat or fattier chunks too. That sometimes moves it into type of dishes called jahnija.
Preparation of okra in the Balkans is most similar to that of bosnian veal sauce, except okra sauce is simmered for a longer period of time. The longer you simmer more tender the meat, and better the sauce. So simmer away.
Unlike the veal sauce more water – or broth – is added to okra throughout simmering. The sauce is more fluid and not as thick. Further addition of broth can make this okra meat sauce into an okra meat soup.
Don’t overdo it with broth or water.
Because okra, especially the dry kind, takes up a lot of fluid and expands, it acts as sort of its own thickener. Thus for an okra soup/ sauce, no other thickener is necessary. But if you add too much water, it will dilute this tasty okra into a translucent mess. Okra soup is supposed to be on the thicker, heartier side.

I know it may be confusing to you as I keep referring to this as an okra soup and an okra sauce recipe. It’s exactly the water factor that divides one from the other. Otherwise, the process is same. Tips on how to cook okra without slime

Don’t be apprehensive about the slime okra has a reputation for. There is an easy solution for how to cook okra without slime for both dry and fresh/ frozen okra.
If using dry okra, we bring it to boil in acidic water (water accented with lemon juice or vinegar). Then we bring the temp down and leave it in for 30 minutes before simmering it with veal. If using fresh okra, we soak the okra pods in cold water with lemon juice or vinegar for 30 minutes before preparation.

What are the okra health benefits?

Some of the interesting okra health benefits include:

Take a look at a more comprehensive list of okra health benefits here. For okra nutrition values, check out the recipe.

Cleopatra swore by okra’s properties to reduce skin redness, and keep its elasticity and stay smooth. And beys used it because of its aphrodisiac properties. It is said that okra was placed in bey’s soup to help with the libido so that they had  energy to satisfy all ladies in their harems.

Serve alone or with a side of mashed potatoes, rice, couscous, or pasta.