Šampita is a marshmallow dessert with fillo dough crust on the bottom and on the top. It’s a very popular dessert in ex Yugoslav republics, including Macedonia. Šampita is a fast, light and delicious dessert.

Prepare this creamy cake that is an ideal addition to afternoon coffee.

I suggest you cut the second layer on squares before applying on cream, so the cake won’t smash when cutting. 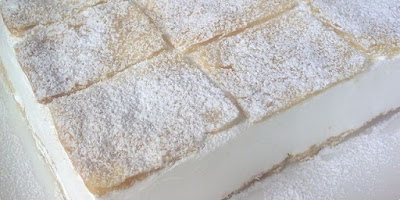