Have you ever tried djimirinki (cracklings)? Djimirinki (also known as chvarci) are made from finely chopped pieces of pork bacon that melts in a larger fire pot. They are a kind of pork ‘crisps’, with fat thermally extracted from the lard.

During the preparation, the fat is removed from the bacon, and the pieces of meat are left to fry and dry. It is recommended to eat them warm combined with red wine. 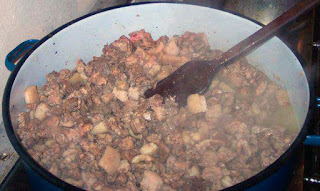