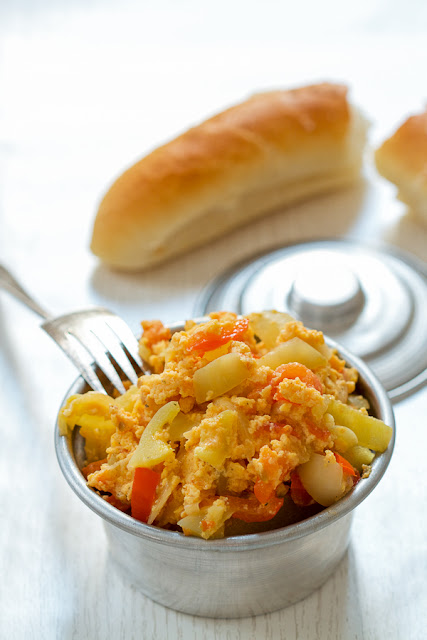 WHAT IS SATARASH, AKA BALKAN STIR FRY?

Satarash doesn’t perfectly fit the description of what’s traditionally defined as a stir fry: ingredients fried in super hot oil, over super high heat.  But I ran into the same problem I often run into when translating recipes: the word satarashhasn’t really been translated before.
In these cases I have two choices:
Leaving recipe name unchanged usually means the dish won’t cross your radar. I’ve tested this several times. The only Balkan dishes you recognize are the familiar ones like baklavaand burek. Everything else might as well be invisible. Even if the dish is exactly what you’re looking for, unless its name alludes to something you’ve eaten or heard of before, you won’t detect it.
So I’ve learned to give in and choose option 2.  Satarash, which includes working a few vegetables on stovetop, most closely resembles stir fry. And so the name was born. (Other good options included menemenwhich is basically a Turkish satarash, as well as shakshouka, a Middle Eastern version of the same.)
Now that you’re aware of the similarities between Balkan and Asian stir fry, let’s go over points of separation. Particularly heat and texture.
Traditional stir fry involves very high heat. Satarash, however, lingers between medium to medium-high. The difference in heat accounts for the difference in texture. Satarash vegetables that are more soft and chewy than crisp and crunchy. Also, there is a bit more sauce in satarash, sometimes even more than a bit of sauce depending on how you prefer it.
(While we are at it, although wok is not widely used in the Balkans if you have it pull it out! Satarash is easier to make in a wok than the pan.)
The basic version of Balkan satarash includes onions, peppers (red, yellow and green bell peppers work great), and a tomato or two. As usual, the spices are few (salt and pepper), mild and added to taste.
If you’re feeling adventurous (and you consume these) add a bit of vegeta or vegetable bouillon. If you want to experiment further with herbs and spices, may I suggest paprika, parsley, and cumin? Start small and see where taste leads you.
The addition of eggs makes this stir fry into a protein-packed breakfast, so I decided to upgrade the dish. (Not an egg person? Want more sauce? Skip them! Or try our risotto satarash.) Eggs soak up the moisture and you almost end up with a tasty omelet.

Description
Satarash: fast and furious four ingredient Balkan vegetable stir fry. Eggs are optional, but recommended. Satarash stir fry is a wholesome breakfast, and a great side too.
Ingredients
Instructions
Notes
Simmering time is approximated. It may take a little more or less.
If not using water, stir more frequently and cook on lower heat to avoid vegetables burning. 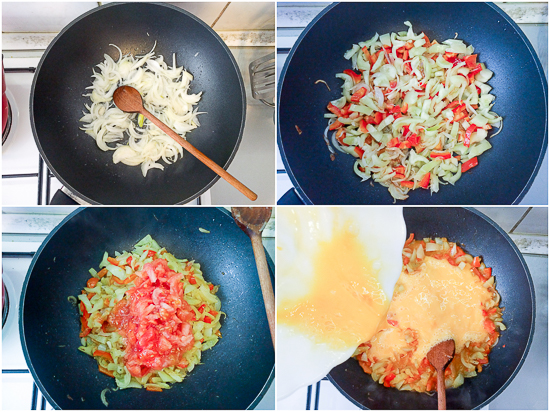